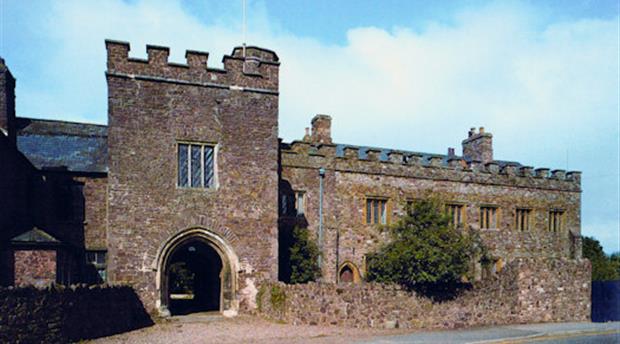 Few buildings evoke such a feeling of history as venerable Tiverton Castle.

Originally built in 1106 by order of Henry I, and later rebuilt and much enlarged in the 13th and 14th centuries, it was once home of the powerful medieval Earls of Devon and of a Plantagenet Princess. With later additions and alterations down the centuries all periods of architecture from medieval to modern can be seen, with beautiful walled gardens within the romantic ruins.

Besieged during the English Civil War by General Sir Thomas Fairfax, it fell due to a lucky shot hitting a drawbridge chain. This was the only time in its long history that it saw battle.

Part Scheduled Ancient Monument and part Grade I Listed, the Castle is the private home of Angus and Alison Gordon, who are happy to share it with others in the following ways:

You are allowed to sit on the chairs as you go round ‑ this is a private house, not National Trust property, and it will not be overcrowded.

There is also a tiny shop selling inexpensive, good quality souvenirs mainly relating to the Castle.

MAKE A CASTLE YOUR HOME. What could be more romantic than spending a few nights in a historic castle in unspoilt Mid Devon?  Three large, self-catering and self-contained apartments sleeping 2 and 4 are found in the main Castle building, and two beautiful cottages within the grounds sleeping 4 and 6.  All are very comfortable and well equipped including WiFi.

Tours are free range, but on most Sundays there is an optional excellent guided tour starting at about 2.45pm. at no extra charge.