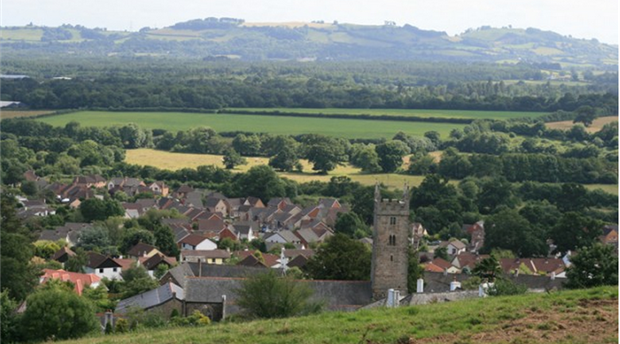 Bovey Tracey is a small market town, built of cob and granite and known as ‘The Gateway to Dartmoor’. It is the ideal location for exploring the southern edge of Dartmoor and is close to the famous Haytor Rock, one of the high points of Dartmoor. It has a long and colourful history and takes its name from the river Bovi or Boui, which passes through the town and is now known as the River Bovey. The de Tracey’s who settled in the area after 1066 were the old Lords of the Manor. One of them, Sir William, who had a share in the murder of Thomas a Becket in Canterbury Cathedral in 1170, is said to have built the Parish church of St Peter, St Paul & St Thomas of Canterbury (which was dedicated to St Thomas) as a penance for his crime. The unbroken list of vicars dates from 1258. The present church, with its fine coloured rood screen and carved stone pulpit, dates mainly from the later 14th and 15th centuries. De Tracey later added his name to that of Bovey, thus renaming the town Bovey Tracey. He is said to have lived in the Manor House in East Street, built about 1200. In 1260 a Fair and Market Charter was granted by Henry III and there is still a Farmers’ Market on alternate Saturdays.

An archway, known locally as Cromwell’s Arch, lies a little off the main street. This is all that remains of a monastery which once stood on the site until it was demolished in 1822. It now serves as a reminder of Bovey Tracey’s connection with the Civil War. In January 1646, the Town was the headquarters of Lord Wentworth. Cromwell's troops are said to have surprised Royalist officers who were playing cards in Fronthouse Lodge in East Street. The Royalists threw coins out of the windows, leaving the poorly paid Roundheads to fight over the money while they escaped by the back door. The Battle of Bovey Heath was fought the following day with Cromwell’s army winning 400 horses and capturing seven regimental colours. A section of Bovey Heath is a Scheduled Ancient Monument Site and important artifacts from the battle have been found there over the years. Bovey Heathfield is now a haven for rare plants and wildlife, owned and managed by Devon Wildlife Trust.

As the area is at the edge of the Bovey Basin, famous for its production of valuable clays, the town’s pottery industry was established in the 1750’s. The industry expanded swiftly. At the height of their success, Bovey Tracey Potteries provided jobs for about 250 people. By the middle of the 20th century, the industry was in decline and closed in the 1950’s. Today the bottle kilns and examples of local pottery can be seen at the museum located at the House of Marbles, to the south of the town, where there is also a glass blowing centre and the largest collection of marbles in the world. Other potteries produced different types of products within the area. These included the Candy Art Pottery, Wemyss Ware and Plichta. Wemyss Ware is still manufactured locally.

The restored Riverside Mill building in the centre of Bovey Tracey is home to the Devon Guild of Craftsmen. The building was never used as a mill but was built in 1850 as a stable. The waterwheel simply collected water from the river for use in the stables and Bridge House, which is now the Riverside Hotel. The old Market Cross, close to the Town Hall, has been restored as a War Memorial. This was the original site of the village green and the Town Hall was opened here in 1866.

In 1820 George Templer built an eight mile tramway to connect the granite quarries at Haytor and the Stover Canal at Teigngrace to transport granite down to the River Teign and the coast. The Templer Way Trail follows much of the original route of the tramway from the moor to the sea.