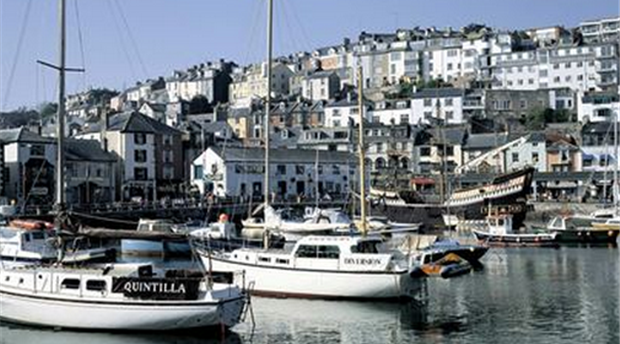 Brixham’s history is all around you and it’s a joy simply to soak up the atmosphere of this ancient harbour with its flourishing fishing tradition on the English Riviera.  However, there are many fascinating treasures to explore in this wonderful old port, designated a UNESCO-recognised Global Geopark because of the internationally-significant geology, spectacular coastline, history and culture.
Housed in the old Brixham Police Station on New Road, Brixham Heritage Museum is a joy to visit with a rich collection of exhibits relating to Brixham’s fishing heritage.  There are also archaeological finds relating to the Napoleonic forts at nearby Berry Head National Nature Reserve.  For train enthusiasts you’ll love the working model of the old Brixham Branch Railway Line.  Items from Brixham’s famous “bone” caverns, which contributed to our knowledge of now-extinct prehistoric animals that roamed Brixham during the last ice age can be viewed.
A pleasant stroll along the coast path east of the fishing harbour is the naturally landscaped Battery Gardens, which not only has panoramic views of Tor Bay, it is also a scheduled Ancient Monument. As far back as the 1780s the area was used for military training; most significantly it was a World War II Coastal Defence Battery, with up to 250 soldiers based there. Many of the structures and emplacements from this period are still in existence and the site is free to enter.
Brixham’s Breakwater Beach has a Blue Flag, Quality Coast Award, and is a Marine Conservation Society Good Beach Guide Recommended Beach. It is traditionally divided into the areas they call Fishtown and Cowtown reflect their fishing and agricultural heritage.
Brixham is home to several festivals including Fishstock, the Heritage Festival, Trawler Races, Brixham Pirate and Shanty Festival (which holds the World Record for a mile of pirates), Pirate Days, a regatta, Brixham Hapnin and Cowtown Festival.
In 1866, The ‘Great Storm’ destroyed over 60 ships and 100 lives were lost in one night. Following this catastrophe the town acquired its first lifeboat.
Shopping in Brixham is as much about taking your time to soak up the local atmosphere as it is about hunting down buried treasures. We’re not promising you’ll find pirate’s booty around every corner, but there are plenty of tiny shops and magical markets to ensure that no matter what you unearth, you’ll head home laden with unique goods and tempting local produce.