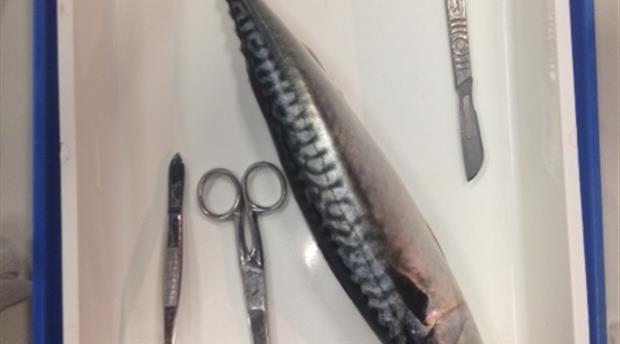 "As I lift my wine glass to my lips, using my open palms because my fingers are covered in fish guts, I hear a squelching noise. “Ewwwww!” burst from the mouths of three twenty-something Plymothians across the table from me. They managed to separate a gooey coating covering the lens of the fish eye. “Poor Chris,” I sigh, placing my wine as far from Pat as possible. Chris and Pat are the mackerels we dissect as part of the Adults Only Aquarium Lates series hosted by the National Marine Aquarium. I insist that our group name our subjects. It seems the most respectful to honor their contribution to our increasingly delightful evening. I was lucky enough to receive a press pass for myself and my friend to this year’s first Late, themed Mad About Science. Lates started in September 2014. Each Late follows a different theme, usually tied into one the museum’s children’s activities or a local event. The first Late featured “basically a marine sex-show” as laughingly explained by Josh McCarty, the National Aquarium’s Head of Marketing. I was curious to learn more about the concept behind Aquarium Lates; Josh kindly agreed to an interview..."